Monkeying Around With IPR 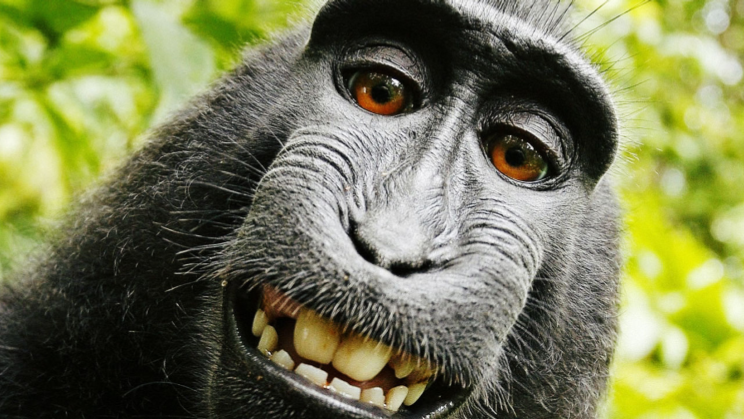 Back in 2011 an Indonesian monkey took a photo of itself using British photographer David Slaters camera. The image was used in the book “Wildlife Personalities” and also became an internet sensation; going viral before eventually being uploaded to Wiki Commons.

But who actually owned the photograph? The Monkey who took it? The Photographer who set up the shot? Or the general public who had liked and retweeted it?

The Case for the Monkey

Ordinarily the person who takes a photograph owns the copyright in that photograph but does this rule apply to non-humans? People for the Ethical Treatment of Animals (PETA) certainly thought so and attempted to sue David Slater on behalf of Naruto the monkey claiming that:

Naruto has the right to own and benefit from the copyright in the Monkey Selfies in the same manner and to the same extent as any other author…. Naruto should be afforded the protection of a claim of ownership, and the right to recover damages and other relief for copyright infringement, as asserted on his behalf by the Next Friends.

The Case for the Photographer

Here the argument was that the photographer had created the photograph in every way bar actually taking the final shot and this should be enough to constitute ownership. In this case David Slater flew out to Indonesia at the cost of around £2,000. He brought with him about £5,000 of specialist equipment and set it up in a remote location in anticipation of the shot. Once the shots were taken he then selected the best ones and edited them

As a side argument David also claims that Naruto did not take the shot and that it was more than likely a female monkey called Ella who took the selfie.

The Case for the General Public

Wiki Common’s argument was a simple one: Since David Slater did not take the photograph he does not own the copyright in it and since the monkey is not a human nor can it own copyright in the photograph – by default the image belongs in the public domain.

PETA’s claim was dismissed by the Honourable William Orrick on 6th January 2016 for lack of standing and failure to state a claim upon which relief can be granted; meaning that a monkey does not have the right to sue under US Copyright Law.

David Slaters ownership of the photograph was dismissed when US Copyright Law was amended on 22nd December 2014 so that: “The term “authorship” implies that for a work to be copyrightable, it must owe its origin to a human being. Materials produced solely by nature, by plants or by animals are not copyrightable.

So at present the pictures belong to the general public – although it must be noted that the courts in the UK might take a different view should David choose to sue on these shores.

So what’s the impact of this ruling? Chances are that it’s not going to change the photograph world all that much but if your cat ever takes an award winning photo it’s probably best for the both of you if you take the credit!